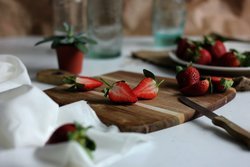 Organic foods are produced and processed in a way that is primarily focused on protecting the environment.

Organic agriculture favors the respect of natural cycles, the use of renewable resources, recycling, the maintenance of biodiversity and the health and well-being of animals.

Pesticides and synthetic chemical fertilizers
Genetically modified organisms (GMOs)
Antibiotics and growth hormones
Irradiation and chemical preservatives.
So is it better?
For the environment?

No doubt about it. The production methods of conventional agriculture have a negative impact on the environment. Pesticides and chemical fertilizers lead to soil degradation, land contamination, water and air contamination, not to mention the loss of biodiversity. (2)

Knowing that the health of the planet has a direct impact on human health, this is an important enough argument to eat more "organic".

There is no certainty on this yet, but it is possible.

Although more in vivo and in vitro studies are needed to fully understand how polyphenols interact with human physiological and pathological processes, clinical studies tend to show protective effects of various foods rich in these molecules against chronic diseases, such as cardiovascular disease, neurodegeneration and cancers (4).

Pesticide residues are reported to be up to four times higher in conventionally grown foods than in organic foods (5). Pesticide toxicity is dependent on exposure levels. The health risk is higher with direct exposure to pesticides (e.g., personally applying pesticides to plants) than with indirect exposure (e.g., through air, dust, water and food). (6)

According to Health Canada, the residual amounts of pesticides present in food from conventional crops do not pose a risk to human health (7).

As for cadmium, it is a highly toxic metal and one of only three heavy metals for which maximum residue limits in food have been set (the other two being lead and mercury). Cadmium accumulates in the human body, mainly in the liver and kidneys, so dietary intake levels of this contaminant should be as low as possible. As with pesticides, although it is desirable to reduce exposure to cadmium, the potential health benefits associated with reducing cadmium through organic diets is difficult to estimate. Furthermore, there were no significant differences for lead and mercury between organic and conventional foods. (8)

It could be assumed that the fact that they contain more antioxidants and less pesticide and cadmium residues would be a benefit to human health. However, one cannot extrapolate the results: what was measured in these studies were the different components of these foods, not their effect on humans. It is therefore not because the results are significant on their composition that the results would automatically be significant on human health.

On the other hand, the relationship between nutritional value and health effects is not so simple. Animal studies to date have shown positive effects of an organic diet on weight, growth, fertility and the immune system. In addition, recent human epidemiological studies have associated the consumption of organic foods with a lower risk of allergy. However, there are few human studies conducted and the results of the studies are still ambiguous. (9)

This is a subjective question. It is said that tastes are not debatable! There have been a few studies on this issue, but the results are inconsistent. Many consumers still feel that organic food is fresher and tastes better than conventional food. (10)

The downside? The price!
Organic foods are reported to cost an average of 47% more than conventional foods (11). Why? The use of pesticides, chemical fertilizers, chemical preservatives and other methods increases and speeds up production, thus reducing costs.

Perhaps the question is not why organic food is expensive, but rather why other foods are not?

While price is still a barrier to buying organic food, here are some tips for reducing pesticide consumption at lower prices:

Tips for avoiding pesticides:
Eat the organic version of fruits and vegetables that contain more pesticide residue and the conventional version of those that contain the least. There is a list that ranks fruits and vegetables by pesticide content: https://www.ewg.org/foodnews/list.php
Wash or brush fruits and vegetables in cold water. You don't need to use a product, just water. If you peel the food, you reduce some of the pesticides, but also the fiber, vitamins and antioxidants. Also, pesticides can be applied to the seeds or pits and are not necessarily found in greater quantities on the peel.
Subscribe to an organic food basket. The price of the food is often cheaper because it comes directly from the farm. This encourages the local economy while being more ecological.
Eating a lot of fruits and vegetables, organic or not, is still beneficial to your health and outweighs the possible harmful effects of pesticide residues.