We are currently closed

Can you avoid your surgery? Alexis M. Léveillé, Physiotherapist 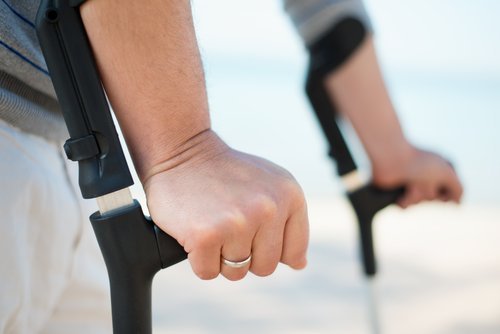 The following article is not intended to denounce orthopedic surgery as a whole, but rather to invite us to reconsider certain surgeries that are, in my opinion, too often used as a first resort rather than less risky approaches such as physiotherapy, which generally carries far fewer risks and sequelae.

On that note, happy reading!

Change takes time
As a physiotherapist, it is sometimes difficult for me to accept the fact that the health care system does not always change at the pace I would like. In fact, it is commonly estimated that the time lag between scientific discoveries and their application is 17 years [1] but this is often doubled when it comes to correcting a misconception in the scientific community [2]. For example, many Randomized Controlled Trials (RCTs) - the gold standard in terms of scientific research - have been converging in recent years towards a disconcerting reality: a plethora of orthopedic surgeries still commonly performed could be avoided and their continued practice would suggest a somewhat oversimplified understanding of the mechanisms behind musculoskeletal pain.

Surgeries to reconsider
The following short list provides some surprising examples of popular surgeries that some studies suggest could be avoided. :

1) Acromioplasty (see images 1 and 2).
IMAGE 1
[3]
Surgeons who perform acromioplasties are based on the theory that pain in people with shoulder tendonitis comes from compression of the rotator cuff tendons by the acromion when the arm is lifted.

IMAGE 2
[4]
Acromioplasty is the surgery where the surgeon removes a part of this bone (the acromion) in order to avoid this compression (see image 2).

In theory, this seems quite logical, but, nevertheless, in two similar RCTs, subjects awaiting surgery for their rotator cuff pain were randomly (and unknowingly) assigned to a group that underwent bursectomy (see image 3) with acromioplasty or to the group that underwent bursectomy only. No significant difference was observed between the two groups in terms of pain, rotator cuff integrity, quality of life or functionality after two and a half years [5], nor after 12 years [6].

Bursectomy is a surgical removal of the bursa, a fluid pocket that normally reduces friction between tendons and bones and/or ligaments, but when swollen would compress the tendons, causing pain.

Similarly, an RCT comparing acromioplasty to physical therapy with exercise in patients with shoulder tendonitis found no difference in terms of functionality, days missed from work and quality of life one year later [8], 4 years later and 8 years later [9].

These studies therefore suggest that the acromion is not the cause of shoulder pain, but also that acromioplasty is an apparently unnecessary surgery.

This surgery is also being questioned in the scientific world. Indeed, although surgeons often report success rates of up to 94%, the retear rate after surgery is reported to be between 39 and 46%! [11]. Worse: no significant difference was observed between those with re-tears and those with intact caps, either in terms of functionality, quality of life or pain at two weeks, eight, twelve or 24 months after surgery. Thus, one might suspect that the high success rates for surgery are due to the fact that most studies do not bother to reimage after surgery, simply assuming that if the patient is better, it is because the tendons remained glued (whereas many patients are much better despite a retear).

Also, RCTs comparing physical therapy and exercise to rotator cuff repair (for non-traumatic injuries) have seen no difference in functionality, pain, strength and range of motion [12].

In short, beyond suggesting that rotator cuff repair is of questionable efficacy, these data suggest that these muscles are often wrongly blamed for causing shoulder pain. Furthermore, this surgery misses an important fact about the rotator cuff, which is that the four muscles that make up the rotator cuff share a common insertion that allows the other muscles to compensate for the one that is torn (see image 5). To borrow the expression of Adam Meakins, a colleague in England, a tear in the cuff is often similar to a hole in a blanket: even with a hole in it, you can still pull on it and the other end will generally follow without any problem.

IMAGE 5
[13]
In C, we see the crescent-shaped cable that connects the 4 muscles forming the rotator cuff together. This structure allows the other three to compensate if one of the cuff muscles is torn.
3) Repair of the labrum and tenodesis of the biceps (see images 6 and 7)
IMAGE 6
[14]
Repair of the labrum is a surgery that aims to reattach the torn part of the labrum, which is the cartilage surrounding the shoulder fossa on which the ball at the top of the arm bone (the head of the humerus) slides

IMAGE 7
[15]
Biceps tenodesis is a surgery where the insertion of the biceps muscle is changed from the torn part to the head of the humerus (arm bone in the shoulder).

An RCT of patients with labrum tears showed no difference between placebo surgery (where the surgeon cuts only the skin), labrum repair, or biceps tenodesis in terms of pain or functionality more than two years after surgery [16].

4) Meniscectomy (see image 8):
IMAGE 8
Partial meniscectomy is a surgery that removes the torn part of the meniscus (the fibrocartilaginous pad between the knee bones). It is said to be arthroscopic when it is performed through a minimal incision using a camera and instruments passed through a wire not much larger than a needle, in order to limit the invasiveness of the procedure [17].

An RCT comparing a group undergoing partial menisectomy with a group undergoing unknowingly sham surgery (initial incision only) showed no difference between the two randomly assigned groups after two years in terms of function, pain and quality of life [18].

Debridement is surgery to remove necrotic (dead or degenerative) tissue, whereas lavage is surgery to flush the joint with sterile fluid to dislodge loose debris.

A similar RCT comparing groups randomly and blindly assigned to (1) a placebo surgery group or (2) arthroscopic lavage or (3) surgical debridement group also found no difference between the groups two years later in functionality, pain or quality of life [20].

A worrying increase
The disappointing performance of the aforementioned surgeries in studies comparing them to less invasive procedures is all the more surprising as it contrasts with their meteoric rise in North America. Indeed, studies suggest that in the United States, the frequency of acromioplasties increased sixfold between 1980 and 2005 [21] and the same increase is reported for rotator cuff repairs between 1996 and 2006 [22]. The rate of partial menisectomy, meanwhile, increased by more than 14% in the United States between 2005 and 2011 [23].

Over-reliance on medical imaging
Another worrying trend in the current orthopedic paradigm is its over-reliance on medical imaging, which is much less reliable than one might think in diagnosing the true source of pain. In fact, more than 22.1% of the population would report complete tears of at least one of the rotator cuff muscles while more than 65.3% of them do not suffer from any symptoms: these people did not even know they had a shoulder "problem" until they were shown medical imaging [24]. Similarly, between 55 and 72% of the symptom-free population between the ages of 45 and 60 would have labrum tears according to magnetic resonance imaging [25]. In fact, in total, up to 96% of the asymptomatic population demonstrates "abnormalities" in the shoulder on medical imaging.

Studies have even shown that many professional baseball pitchers throw without any pain or weakness despite cartilage and/or muscle tears in the shoulder they throw with [26]. A similar phenomenon can be observed for back problems, where approximately 52% of the symptom-free population has disc bulges while 27% reportedly have disc herniations [27]. Similarly, a study of subjects who had never had back pain in their lives showed "significant abnormalities" in 57% of them, i.e. disc herniations in 36% of them, while 21% had spinal stenosis [28]. In short, degeneration of the body such as tears, herniations and arthritis often seem to be simple processes of aging and are present in many cases before the sensation of pain, without there necessarily being a link between the two. Think of the skin: we get wrinkles with age, but it doesn't usually hurt our face!

A new pain paradigm
In short, when we look at the classic biomechanical model of pain - that our pain comes from defects and asymmetries in the body - we quickly see that it is flawed: no one is perfectly symmetrical, but not everyone has pain! So when I explain their pain to patients, I rarely look to see if they are "crooked", preferring instead to ask if they have changed their habits recently or done anything out of the ordinary. According to this more modern paradigm, pain would often come from the nervous system trying to protect itself from harm - whether actual or potential - by creating undue tension and pain to avoid a movement it perceives (often exaggeratedly) as dangerous, hence the pain often persists long after the danger has gone. Pain is also multifactorial: it is greatly influenced by mood and psychological problems such as depression [29, 30]. Moreover, pain can be greatly reduced by changing the patient's perception of it [31, 32].

To keep it simple, pain would often be a protective reaction of the body to which too much has been asked, too quickly, especially if it is after long periods of doing nothing, whether it corresponds to real structural damage or not. For example, moving your entire apartment while sitting all day without exercising or running 10 km at your usual pace after months of rest in the cold winter. Conversely, pain can even set in after switching from an active to a sedentary job overnight.

All in all, the body is often skittish and cranky; it doesn't like abrupt changes and pain is its way of letting us know that. In fact, this is often where I see the role of the physiotherapist, to gradually reintroduce the patient to the tasks of daily living and physical activity at an intensity tolerable by their nervous system: most of the time, we are not fixing what is "broken", but getting the body (and mind) used to a task it no longer wants to do.

Rest, physiotherapy and gradual exercise: the secrets behind the effectiveness of many surgeries?
In this sense, the benefits reported by the aforementioned surgeries could, according to this model, be simply the consequences of the rest and gradual return to exercise forced by the operation. The surgeries are, after all, a rather compelling invitation to reconsider one's lifestyle. In other words, after surgery, you are forced to rest and then you are often told to change your lifestyle habits (stop smoking, do some exercise, eat better...) and do physical therapy. Many RCTs have shown that exercise programs guided by physiotherapists are as effective as many surgeries, including acromioplasty, rotator cuff repair with acromioplasty [33, 34, 35, 36, 37] and that they prevent these surgeries in 75% [38] to 80% [39] of patients. Even better, physiotherapy is much less expensive for the health care system and generally involves fewer risks than surgery.

Again, far be it from me to infer that all orthopedic surgeries are unnecessary: orthopedic surgery is often crucial and the only option (e.g., open fracture, severe and recurrent dislocations [40] complete anterior cruciate ligament tear [41].

This article simply invites you to three simple considerations if you are suffering from musculoskeletal pain:

1. Do not automatically panic if medical imaging reports abnormalities. You are a complex person who cannot be reduced to a single image. After all, even Beyoncé doesn't look good in all her pictures!

2. Consult the studies (RCT) about your surgery if a doctor tells you that you need surgery. Surgery is your decision.

3. give physiotherapy a chance before surgery