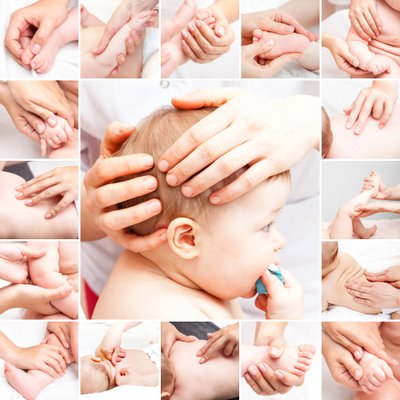 Every birth should be followed by a careful osteopathic examination

Childbirth can be the first trauma for the baby.
Too long or too short, it can disturb the normal functioning of the cranial structures.
Difficult, it sometimes requires the use of spatulas, suction cups or forceps, which will influence the mobility of the junctions of the cranial bones and cause immediate or later functional disorders.

Often, newborns are born with a slightly deformed head, with the skull in obus, with one eye more closed than the other, with one ear more forward than the other, with a nose that is a little crushed... Parents are told that this will recover by itself...
Apparently yes, but the cranial balance is broken and there is a dysfunction which requires an osteopathic treatment.

1. if the delivery was done under epidural
2. if the labor was too long (more than eight hours) or too short (less than two hours)
3. in case of a twin pregnancy
4. if the presentation was breech, face or forehead
5. if the head was pulled too hard
6. if the cord was wrapped around the neck
7. if there was prematurity (the skull is more fragile)
8. if the mother's belly was pressed to facilitate the expulsion
9. if forceps or vacuum was used
10. in case of caesarean section
11. in case of fetal suffering, even light resuscitation of the baby

Learn to observe your baby and consult when :

1. the baby bends backwards when you pick him up or when you give him a feed
2. the baby is tense with stiff arms or hands
3. he jumps at the slightest noise and shows small tremors
4. he is sluggish and has difficulty holding his head
5. he cries all the time
6. sleeps very little
7. regurgitates
8. he does not digest and is agitated after feeding
9. he has difficulty or takes an infinite time to suckle
10. he wears his hair behind his head asymmetrically
11. he has fallen off the changing table (even if the X-rays of the skull have not shown any lesions)
12. he has a bad position of the hips, feet
13. he always puts one arm back
14. he always turns his head to the same side and sleeps on the same side
15. he is always cross-eyed
16. he has recurrent ear infections and bronchitis, he has noisy breathing

The expert and attentive hands of an osteopath will allow him to have a good start in life.